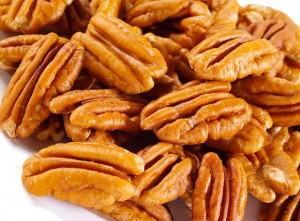 Lowell, MA – Eating about a handful of pecans each day may play a role in protecting the nervous system, according to a new animal study published in the current issue of Current Topics in Nutraceutical Research. The study, conducted at the Center for Cellular Neurobiology at the University of Massachusetts Lowell, suggests adding pecans to your diet may delay the progression of age-related motor neuron degeneration. This may include diseases like amyotropic lateral sclerosis (ALS), also known as Lou Gehrig’s Disease.

Researchers suggest vitamin E – a natural antioxidant found in pecans – may provide a key element to neurological protection shown in the study. Antioxidants are nutrients found in foods that help protect against cell damage, and studies have shown, can help fight diseases like Alzheimer’s, Parkinson’s, cancer and heart disease. Pecans are the most antioxidant-rich tree nut and are among the top 15 foods to contain the highest antioxidant capacity, according to the U.S. Department of Agriculture (USDA).

Dr. Shea and his research team carried out a number of laboratory studies on three groups of mice specifically bred to demonstrate severe decline in motor neuron function that are commonly used in studies of ALS. Each of the three groups was fed a control diet or one of two diets containing differing amounts of pecans ground into their food. Standard testing methods were used to determine how well the mice scored relative to motor neuron functions, both before and after they were provided with one of the three diets.

Mice provided a diet supplemented with pecans displayed a significant delay in decline in motor function compared to mice receiving no pecans. Mice eating the diet with the most pecans (0.05%) fared best. Both pecan groups fared significantly better than those whose diets contained no pecans. The result was based on how the mice performed in highly specific tests, each of which compared mice on the control diet with mice consuming pecan-enriched diets.

“Eating healthy doesn’t have to mean eating bland,” said Beth Hubrich, a registered dietitian with the National Pecan Shellers Association. “Pecans are a tasty addition to a healthy diet and scientific research continues to show they’re good for you as well.”

Eating a handful of pecans will also provide you with more than 19 vitamins and minerals, including vitamin A, folic acid, calcium, magnesium, phosphorus, zinc and several B vitamins, Hubrich said. Pecans are naturally cholesterol-free and sodium-free.

My New Thing Is “LIQUID CHLOROPHYLL”